Android N (Nougat): Google has announced that the Android N operating system is Android Nougat.  Android 7.0 “Nougat” is an upcoming release of the Android operating system. As the tradition goes, Nexus smartphones will be first ones to get the software, but there are other OEMs that guarantee a quick rollout of the latest Android updates. Nougat is the latest dessert-themed version of Android. According to google, this will be out later this summer. Google’s own Nexus series is expected to receive Android Nougat update later this year sometime in August or early September. It means the other smartphone brands will follow Google’s lead. Check out the Android 7.0 Nougat Features and Supported Devices (Smart Phones) List from the below article.

With this feature, users can use apps in a split-screen mode and picture-in-picture mode as well. It’s almost like an app, floating around the screen. This feature will also work on tablets and Android-powered TVs. 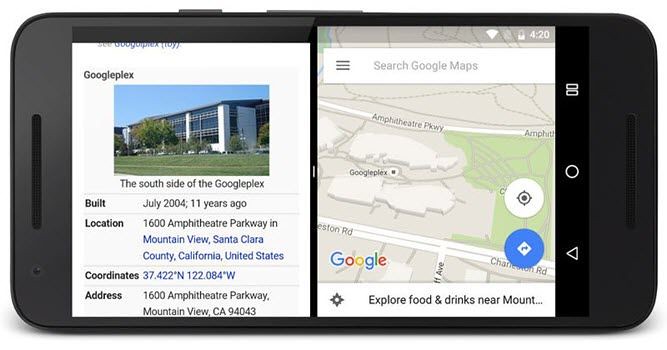 The whole notification shade redesign looks spectacular, and as someone who frequently wakes up to a ridiculous list of notifications each morning, bundled notifications sound like a gift from the gods of mobile technology themselves.

Google is making changes to the Doze mode in Android N. Previously, in Android Marshmallow, the Doze mode would not be triggered when it was kept in the pocket/bag. With the new update, this feature will be activated when the screen is turned off. Hence, it will save upon more battery.

Night Mode has been seen implemented on some custom ROM skins like Cyanogen. But company finally thought it’s better to give its user an option to switch to dark color during night’s time as the white settings UI is unpleasant to look at. It is probably one of the welcoming comebacks on the Android N.

The new build allows three elements change – messaging, app drawer and settings. These various areas offer different types of size change; small, default, Large, Larger and Largest. This is the feature that developers would applaud, as well as many power users would love it. Making the system think that it’s got a larger or small screen depending upon the needs is possible with DPI change. You can access this feature from Settings> Display> Display Size.

The company is also launching a brand new platform called Daydream. However, to use the new Android-powered platform, smartphones will need to be Daydream-certified along with the appropriate sensors. At the moment, Google is working on VR-versions of apps such as YouTube, Photos, and others.

The Data Saver is a new option in the Settings app, which aims to make your smartphone use fewer data. The company figures that you’re more likely to switch the toggle at the end of the month, as well as while you’re roaming. Or maybe you simply have a small prepaid data pack. Additionally, apart from blocking the background data usage, it also keeps us informed about how much data pack are the apps using.

The quick settings have been changed, now when users pull down the notification shade, they are greeted with a single minimalized row of settings icons. Interestingly, it can be accessed without pulling down the shade twice, which is what one has to do in the Marshmallow. The default icons in this row include Wi-Fi, mobile data, Do Not Disturb and flashlight. It is a welcoming change and makes accessing some settings quite faster. Very Convenient!

the recent app menu; it showcases much larger cards, meaning you can see more of the App running in the background. The cards now take up a lot of area on the screen, thus revealing more of the App’s UI.

Project Svelte is an effort that will make Android much more efficient in allocating memory. It would allow the possibility of smoothly running the latest Android OS version in a much broader range of devices.

With the release of Android Nougat, we’ll be getting a settings menu that gives us more information from the get-go. Being able to see how much data I’ve used, or what my Bluetooth situation is, or what my average RAM usage is without having to actually select those options and delve deeper into the settings menu will be a welcome change. 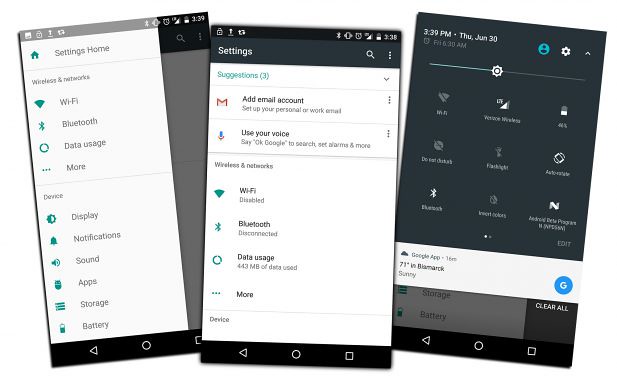 We have used so many third-party apps for this feature. But with the inbuilt support of blocking the numbers would make it more intuitive to users. Once a user blocks a particular number, they will not receive the text or calls from that specific number. It’s interesting to see that the blocked numbers list will be persisted through your Google account.

VPN, Virtual Private Network, is quite a useful thing when it comes to browsing anonymously and moreover, it’s quite clear that Google wants to make Android devices more secure.

Information like medical details, blood type, personal contact info and even details of the emergency contact, all these information is made readily accessible to an emergency responder at the site. you can head over to the Settings app and find the option under. This all information can be accessed by tapping on the “Emergency” button on a locked phone, then further double-tapping the Emergency Info button. 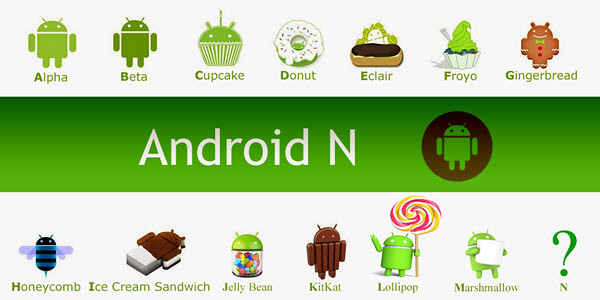 If you want the latest software, it’s best to get a Nexus device, as the newest version of Android will always be pushed to that first. Newer Nexus owners are currently able to test out Developer Preview 1.

HTC 10, One M9 and the HTC One A9 are to be supported with the Android 7.0 Nougat. The LG G5 along with the Galaxy S7 and S7 Edge will offer Android Nougat support, as will the upcoming Galaxy Note 7 due for release next month. Other Android handsets from the likes of Sony, Motorola, OnePlus, Honor, Xiaomi, and Huawei are also likely to get Android Nougat on a later date.

Motorola has also confirmed the Moto G4 Plus will get Android 7 software in the future. Sony Xperia smartphones that will be joining the league.

Below is the list of Sony smartphones that will receive Android Nougat after its release this fall:

Android Nougat, like all the previous Android versions, will be released over-the-air and an OTA notification will alert users to download the software when available.