GiMA Awards 2016: The Global Indian Music Academy Awards (GiMA Awards) are presented annually by Global Indian Music Academy to honour and recognise best Indian music. 2016 is the sixth edition of the GiMA Music Awards. This year Ayushmann Khurrana will host the event held on April 06, 2016 and will have performances by singers like Arijit Singh, Yo Yo Honey Singh and Sukhwinder Singh. The organisers of GiMA Awards 2016 have taken an initiative this year, which gives fans (GiMA Fan Park) an opportunity to attend the gala night. Songs from films like “Piku,” “Dilwale,” “Bajirao Mastani,” “Tanu Weds Manu Returns” and “Dum Laga Ke Haisha” are nominated in most of the categories. Check out the complete details of GiMA Awards 2016 Full Show Live Streaming, Nominations & Winners List from the below article.

Here is the complete list of Nominees / Nominations for 2016 GIMA Film Awards.

Click the below link to know the Non Film Music Nominees of GIMA Awards 2016. 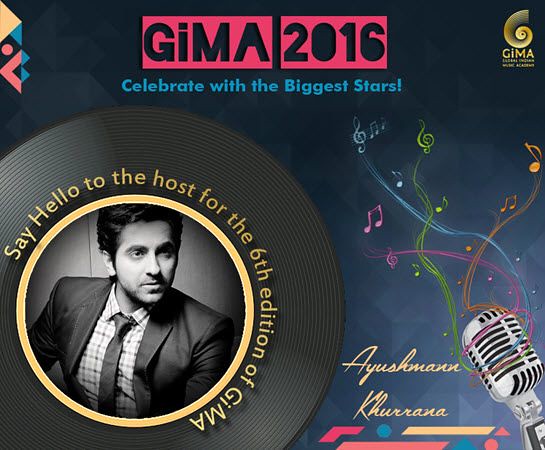 Bollywood celebrities like Ayushmann Khurrana, Arijit Singh, Sonakshi Sinha, Yo Yo Honey Singh and others are going to perform in GIMA Music Awards 2016 on April 06, 2016.

The officials are not yet confirmed the date and time of this show in Colors TV. We will update the details when the info is available.

Click the below link to watch the live streaming of GIMA Music Awards 2016.

Breakthrough Artiste of the Year: Badshah

Hungama music presents most Streamed Song of the year: “Sanam Re”

Most Popular Radio Song of the Year brought to you by Superhits 93.5 Red FM Bajaate Raho: “Gerua”

Song of the year: Amitabh Bachchan for “Atrangi Yaari” performed by a celebrity for the movie “Wazir”