Leopard Enters School In Bangalore: A leopard entered a private school near Varthur, 25 kilometres from the state capital Bengaluru on Sunday (07th Feb 2016). The Leopard attacked people, injuring three forest department personnel, including a veterinarian, officials said. The Hindustan Times reports that it entered the school around 4:00 am local time but wasn’t discovered until it attacked an employee in the late afternoon. The scene of the attack was captured by television channels which had arrived at the spot to cover the operation. At least four people have been injured in a bid to capture a leopard which wandered into a school in southern India where it remained undetected for hours. Check the below article for Live CCTV Footage & Vido Coverage by Channels regarding Leopard Enters School Premises in Bangalore. 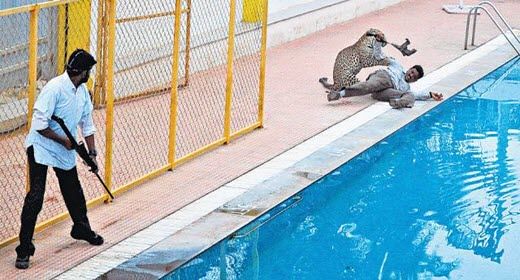 CCTV footage shows the early moments when the leopard, believed to be an eight-year-old male, walked onto the school’s premises early yesterday morning.  CCTV footage showing the leopard walking through the corridors of the school. As the news spread, people from adjoining areas trooped in. Soon police and forest department were called in and the school was cordoned off.

“We bolted the room in which the leopard was hiding and tranquilized it with one shot through the mesh and ferried in a cage to the Bannerghatta zoo,” Karnataka chief wildlife warden Ravi Ralph said.

“We will identify its pug marks in and around the city’s eastern areas to find out from where it entered the city unnoticed and without harming to anyone,” Ralph asserted.
Of the five persons injured in the rescue operation, a wildlife activist Sanjay Gubbi, was hurt grievously.

“We will hold an inquiry into the strange incident and take more measures to prevent man-animal conflict, as leopards adapt to human habitats for prey and remain undetected as they camouflage,” Ralph added.

* 4 am Leopard suspected to have entered the school campus

* 4.13am CCTV cameras inside the school capture the leopard

* 5.30am Security guard alerts the police

* 7 am Cops arrive at the scene

* 9.30am Forest personnel arrive to capture the wild animal

* 12.30pm Dogs pressed into service, but no luck in tracing the leopard

* 2.30pm Forest officials fail to spot the leopard inside the school; assume it has escaped

* 8.30pm Leopard finally captured and taken out of school.