Medaram Sammakka Saralamma Jatara 2016:  Sammakka Saralamma (Saralamma) Jatara is a sacred tribal festival celebrated by Telangana people in Medaram in Tadvai Mandal in Warangal district, Telangana. This is the first time Medaram Jatara have been conducted by Telangana Govt after the state diversification. An estimated 10 million people gathered in 2012. The upcoming Jathara is being organized during 17-20 Feb 2016 and all the arrangements are being underway to welcome the estimated 20 million visitors. Devotees from Telangana, AP, Chhattisgarh, Orissa, MP, Maharastra, Karnataka etc are going to participate in this tribal festival. Check out Medaram Sammakka Saralamma (Sarakka) Jatara 2016 History, Dates and more details from the below article.

The upcoming Medaram Jathara is the first one after the formation of Telangana state and it takes greater significance with special attention by the government.

Facilities like roads, water, sanitation, health and hygiene are being provided by the government by spending several hundreds of cores (INR). The total expenditure exceeds Rs.250 crores by the government for the Jathara. The minister has also said that they are expecting over 1.25 crore people would participate in the mega jatara.

Telangana Transport Minister P. Mahender Reddy has said that total 3,605 TSRTC buses from 51 regions will be operated to Medaram jatara 2016 for the four-day Sammakka Saralakka tribal festival beginning from February 17th to 20th 2016.

About 15 medical camps and 15 information centres for missing children would be in place during the historic Medaram jatara in the district.

According to a tribal story, about 6-7 centuries ago, that is in the 13th century, some tribal leaders who went for a hunting found a new born girl (Sammakka) emitting enormous light playing amidst tigers. She was taken to their habitation . The head of the tribe adopted her and brought up as a chief tain (She later became the saviour of the tribals of the region) she was married to Pagididda Raju a feudatory tribal chief of Kakatiyas(who ruled the country of Andhra from Warangal City between 1000 AD and 1380 AD).She was blessed with 2 daughters and one son namely Sarakka, Nagulamma and Jampanna respectively. 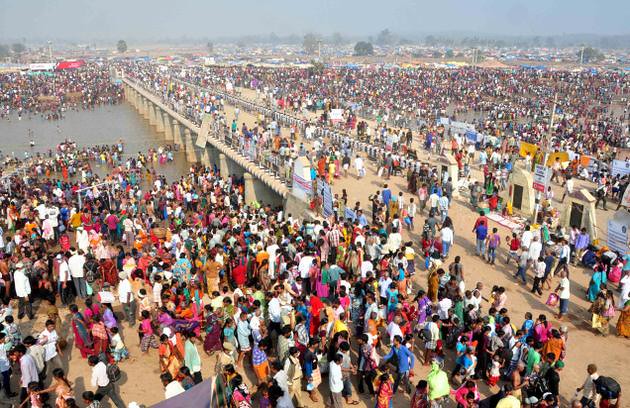 Medaram is Located about 90 KM from Warangal District.

Traveling by Train: From Hyderabad to Warangal, you can take the train ( reservation should be done well in advance) and From Warangal you can get a number of buses to Medaram during Jatara (festival) time.

Traveling by Bus: first you need to reach Warangal by any Bus and from there you can get a number of buses to Medaram during Jatara (festival) time.