New 500, 2000 (Rs) Rupees Note Features: To fight against black money, Prime Minister Narendra Modi has announced that the currency notes of Rs 500 and Rs 1,000 denominations would be abolished from the midnight of November 8, 2016. However, the old Rs 500 and 1,000 notes will be accepted in government hospitals, petrol pumps, and CNG gas stations until November 11 midnight. People will be given 50 days, from November 10 to December 30, to deposit or exchange Rs 500 and Rs 1,000 notes at any bank or post office. The Reserve Bank of India (RBI) will issue new Rs 500 and Rs 2,000 notes very soon. Check out the complete Features of New 500 Rupees, and 2000 Rupees Notes in below article. The 2000 rupee note that is being introduced carries an image of the Mangalyaan to celebrate India’s Mars mission, he said.

On the reverse side: Here are the Features of New Rs 500 notes:

The new series of Rs. 500 notes, said economic affairs secretary Shaktikanta Das, will be called the Mahatma Gandhi series of bank notes and they also carry a picture of Delhi’s Red Fort. 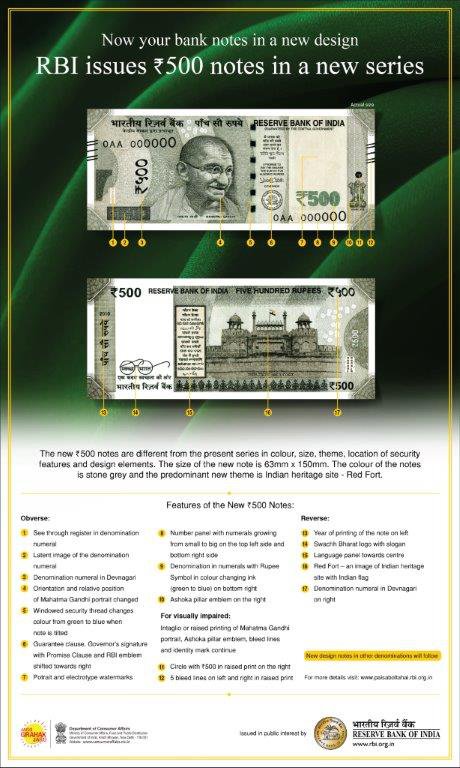 All bank ATMs will be closed on November 9 and November 10. Even when ATMs become functional, people can initially withdraw only up to Rs 2,000 before increasing the withdrawal limit to Rs 4,000, according to reports. Meanwhile, there won’t be any cap on non-cash payments and transactions.