Suchitra Karthik Twitter Leaks: Singer-actor Suchitra created a storm when she posted a series of tweets attacking South superstar Dhanush. She has dragged several celebrities into controversy, promising to bring out many sex scandals in the open. These pics and videos created a storm in social media with #SuchitraLeaks and #Leelai hashtags. And much more memes posted on facebook regarding this Suchi Leaks. Later, her husband tried to end the issue by saying that her account was hacked and then it was retrieved. The photos have now been deleted, but not before already going viral. Here, you can check out the Singer Suchitra Karthik’s Tweets, Photos, Videos from the below article.

Suchitra Karthik and Dhanush have been in a feud for quite some time. The singer-radio jockey’s accused Rajnikanth’s son-in-law Dhanush and his team of manhandling her.

Suchitra Karthik had been doing the rounds on the internet after she allegedly revealed intimate and private pictures of Kollywood stars like Dhanush, Simbu, singer-composer Anirudh Ravichander, actresses Hansika Motwani, Trisha Krishnan, and other celebrities

Suchitra Karthik Kumar also shared a schedule when more such scandalous pictures and videos will be released on the internet. A tweet from the singer’s account revealed that another shocking revelation would be made on Monday, March 6, 2017.

The Twitter account also had posts which made allegations that actors Dhanush and singer-composer Anirudh Ravichander spiked her drinks at a party and slept with her. These allegations were followed by a revelation that scandalous pictures and videos of the actors will be released and Suchitra Karthik’s Twitter account also had a schedule for the leak of these pictures.

Later, her husband tried to end the issue by saying that her account was hacked and then it was retrieved. The singer has deactivated her old account and started a temporary account where she revealed that she has already registered a police complaint with the Chennai Police. 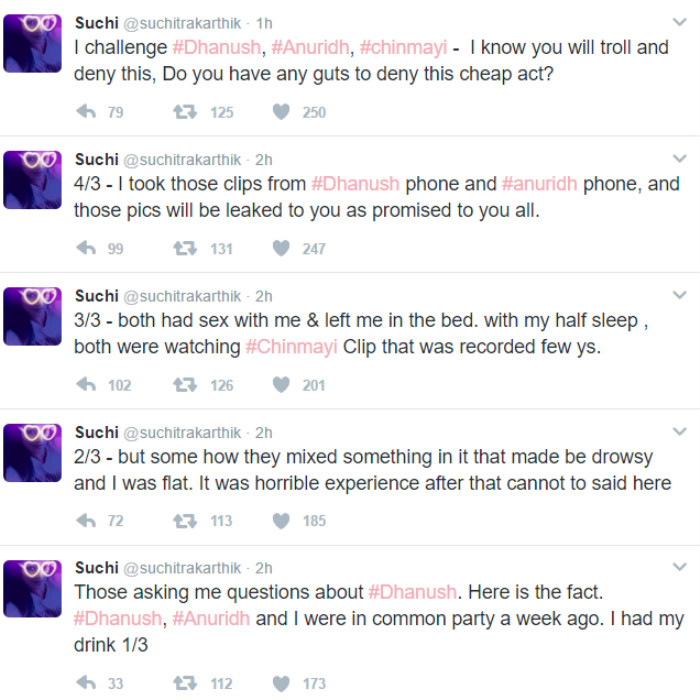 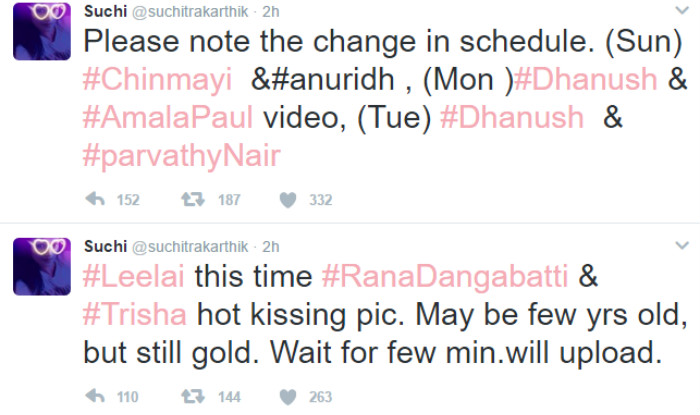 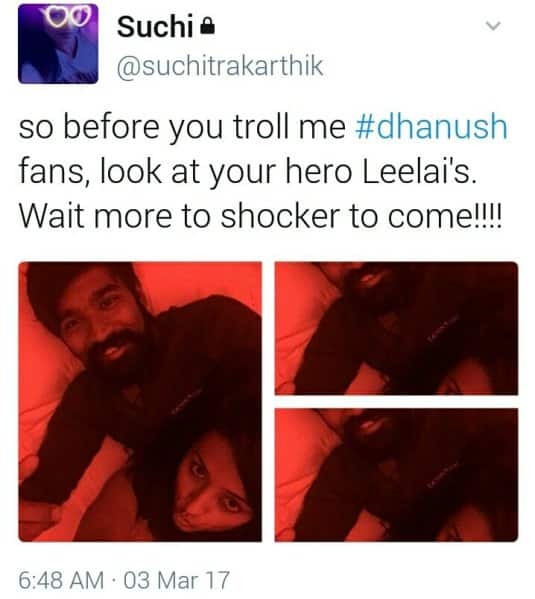 Stay tuned to this page for latest tweets, images, videos of singer Suchitra Karthik’s twitter account. We will update those stuff, whenever she posted online…..