Telangana State Formation Day 2016: Telangana was formed as the 29th state of the country on June 2nd 2014, after it was carved out of Andhra Pradesh. The Second Anniversary of Telangana Formation Day (Telangana avirbhava dinotsavam) Scheduled on June 2 2016. Mr. kalvakuntla Chandra Shekar Rao well known as KCR Announced that June 2nd is a holiday. KCR is also the president of TRS (Telangana Rashtra Samithi) Party. The 10 districts in the newly-formed state have geared up for celebrating ‘Telangana Formation Day’ that will witness a host of events as part of week-long celebration on Telangana’s culture and struggle (for statehood) on a grand scale. Check out the below article to get the more details regarding Telangana Formations Day 2016 Celebrations, Awards List and News on Live.

Telangana Government offices, hotels and monuments would be lit up, fireworks would welcome people on Tank Bund, kavi sammelans and quwwali would enthrall lovers of shayari and 550 artistes would showcase the history and culture of Telangana. In short, the Telangana Government is not leaving any stone unturned to make the second anniversary of the formation of the state to be bigger and better.

The Government announced prizes for best illuminated hotel and asked institutions, hotels and restaurants to deck up their premises. The first prize would be Rs 1 lakh, second Rs 50,000 and third prize Rs 25,000.

The Chief Minister directed the officials to illuminate and tastefully decorate all government installations including arranging hoardings and banners. Festive atmosphere should also be seen in industrial units, hospitals, hotels, malls, cinema halls and other public places.

In Hyderabad, banners should be arranged at the airport, railway/bus stations. Besides, fruits should be distributed to patients in hospitals and fruits, sweets and non-vegetarian food should be arranged to the inmates of destitute homes and schools for the visually-challenged.

The specially illuminated coracles will be placed between the iconic Buddha statue and Tank Bund on June 2 to mark the Telangana Formation Day.

The Telangana government is set to unfurl India’s largest flag erected on the tallest flagpole on June 2. The plan is currently waiting for a clearance from the Airport Authority of India. Chief Minister K Chandrashekar Rao had in May announced that the flag will be unfurled at the 92-acre Sanjeevaiah Park in Hyderabad to mark the Telangana formation day.

The proposed height of the flagpole is 303 feet — 10 feet more than the current tallest flagpole pole in Ranchi. The height could, however, be reduced to 295 feet if the AAI raises objections, said government sources. The dimensions of the flag are expected to be 72ft X 108ft. 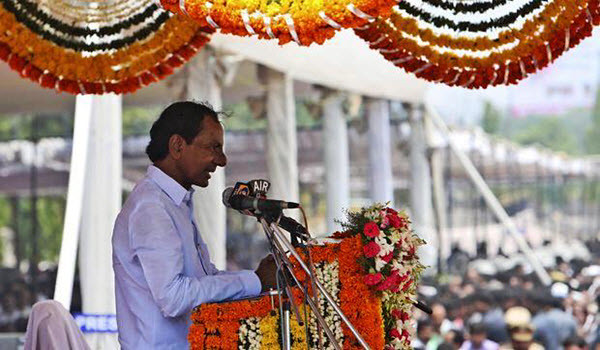 Click the below link to watch the live streaming of Telangana Formations Day 2016 Celebrations.

The Telangana government has announced names of State Formation Day winners from 32 different categories. The list included eminent personalities who excelled in their respective fields.

To accolade for her feats, KCR called the 22-year-old at his camp office on Tuesday. KCR gave a pleasant surprise to Falak by promising to honour her on June 2, on occasion of Telangana formation day.