The Pooram Nakshathram began at 05:02 in the morning on Friday and will end at 06:09 am on May 6. The temples from the Paramekkavu side (Eastern Group) and Thiruvambady side (Western Group) take part in this festival. The two groups of temples are just 500 metres apart from each other

Here are the temples from each of the groups: 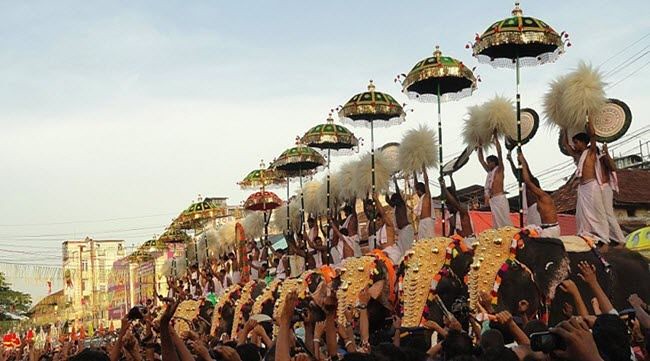 Click the below links to watch the live streaming / watch online of Thrissur Pooram 2016 Festival Celebrations.

Fireworks are an essential part of almost all events in Kerala. But in Thrissur Pooram, the fire works are distinct in character, performance, excellence and magnitude. Both Thiruvambady and Paramekkavu temples compete with each other to provide the crowd with the best and the most unexpected.

Though fireworks are an essential part of celebrations on Kerala, the Thrissur Pooram fireworks are the most spectacular in view and nature.

The fireworks display (vedikettu) is one of the highlights of the festival, as the Thiruvambady and Paramekkavu temples compete to provide the best sound and display for the crowd. After the sample vedikettu ahead of the pooram day, the main fireworks display will be held between 3 a.m. and 6 a.m. the next day at the Swaraj ground in Thrissur.