Trash Doves (Purple Bird) Meme: In the internet, trends take off for no apparent reason and this purple floppy bird is no exception. Trash Dove is the latest meme sensation to have taken over the social media networks. Floppy Trash Dove is part of a collection of Facebook stickers known as Trash Doves which contains both animated and non-animated stickers featuring a purple pigeon in various situations. American artist Syd Weiler who created the birds also feels pretty surprised about the whole thing, that first went viral in Thailand. Check out the complete story behind headbanging purple bird (trash dove) sticker in facebook from the below article.

The Trash Dove was created by artist Syd Weiler on her drawing livestream back in September, and she turned it into an iPhone sticker pack in January. It didn’t go viral, though, until the Thai internet got a hold of it last Wednesday. 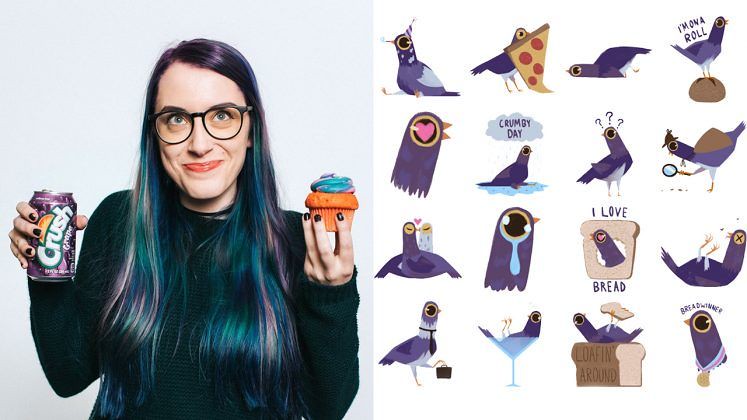 As for how it is popular, it is because some people somehow found the sticker (this one in particular) very annoying.

Many other people think the sticker is cool and/or it’s funny how someone got annoyed over this and began spamming with it in comments section. This went viral when popular Facebook pages joined the spamming festival and soon enough it’s all over Facebook.

It was the headbanging version of the bird that really took off. English-language Thai news site Khao Sod English reported that Thai netizens “filled entire comments sections” with the graphic.

Why? It’s not really clear, but Khao Sod offers a partial explanation: “One theory is that the word for bird, nok, is also used to describe someone hopelessly single or suffering from unrequited love.”

On a side note, there’s also an issue where the sticker creator Syd Weller posted a thank you image for Thai people who made it so popular. The image is the Trash Dove holding Thai flag with its leg, which some Thai people found offensive*. Some other people think it’s nonsense to get offended over this, so as a result, there was a number of dramas in Thai Facebook about the issue. In the end, Syd Weller apologized for it on her Facebook page.

Check out the full sticker pack of Trash Doves by Syd Weiler below:

Here are some of the memes generated with Trash Dove:

This trash dove thing is getting out of hand now 😂 pic.twitter.com/I359qRztxr

One man's trash dove is another dude's floopy bard. pic.twitter.com/7lNDn3Sdim

Syd Weiler took to Facebook to thank her fans for all the support and enthusiasm.