Donald Trump Inauguration Speech 2017: With the conclusion of the farewell speech by President Barack Obama, all eyes are on the President-Elect Donald Trump Inaugural function. America’s 45th president Donald Trump will mark the commencement of the four-year term of President and Mike Pence as Vice President. The Inauguration ceremony will be held on Friday, January 20, 2017, on the West Front of the United States Capitol Building in Washington, D.C. Check out the complete details of Donald J. Trump‘s Inauguration Address Full Video Watch Online, Live Streaming, Tickets, Celebrities, Trumps’s Inauguration Speech Transcript in PDF Format and more details from the below article.

Time: The inaugural swearing-in ceremony will begin at 11:30 Eastern

Reports suggest that the 2017 presidential inauguration of Trump and Vice President-elect Mike Pence is said to cost nearly $200 million.

The inaugural swearing-in ceremony will begin at 11:30 Eastern on the western front of the Capitol building, where Trump will take the oath of office and make his inaugural address to the American people.

The inaugural parade will follow the swearing-in ceremony, scheduled to begin at 3 pm Eastern and make its way down Pennsylvania Avenue toward the White House.

Trump, Pence, and their wives will attend three official inaugural balls. Two will be at the Walter E. Washington Convention Center and are ticketed; the third is the Armed Services Ball at the National Building Museum, which is by invitation only. Details have not been confirmed.

Trump’s Inauguration Speech will be live on most of the news channels around the world including Fox, CNN, MSNBC, CBS, ABC, and NBC News, with special all-day inauguration coverage.

The address will be broadcast live online at Whitehouse website and few other youtube channels. Twitter will live-stream US President-elect Donald Trump’s inauguration here on January 20. 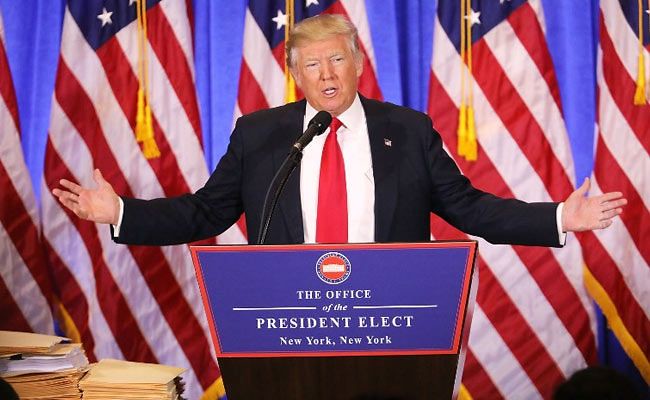 We, the citizens of America are now joined in a great national effort to rebuild our country and restore its promise for all of our people.

Together, we will determine the course of America and the world for many, many years to come. We will face challenges. We will confront hardships, but we will get the job done. Every four years we gather on these steps to carry out the orderly and peaceful transfer of power. And we are grateful to President Obama and First Lady Michelle Obama for their gracious aid throughout this transition. They have been magnificent. Thank you.

For too long, have reaped the rewards of government while people have borne the cost. Washington flourished, but the people did not share in its wealth. Politicians prospered period, but the jobs left and the factories closed. The establishment protected itself but not the citizens of our country. Their victories have not been your victories. Their triumphs have not been your triumphs and while they celebrated in our nation’s capital, there was little to celebrate for struggling families all across our land.

That all changes starting right here and right now, because this moment is your moment. It belongs to you. It be longs to everyone gathered here today and everyone watching all across America. This is your day. This is your celebration. And this, the United States of America, is your country.

Everyone is listening to you now, you came by the tens of millions to become part of a historic movement, the likes of which the world has never seen before. At the center of this movement is a crucial conviction, that a nation exists to serve its citizens. Americans want great schools for their children, safe neighborhoods for their families and good jobs for themselves.

These are just and reasonable demands of righteous people and a righteous public. But for too many of our citizens, a different reality exists. Mothers and children trapped in poverty in our inner cities, rusted-out factories, scattered like tombstones across the landscape of our nation, an education system flush with cash but which leaves our young and beautiful students deprived of all knowledge. And the crime and the gangs and the drugs that have stolen too many lives and robbed our country of so much unrealized potential.

This American carnage stops right here and stops right now. We are one nation and their pain is our pain. Their dreams are our dreams and their success will be our success. We share one heart, one home and one glorious destiny. The oath of office I take today is an oath of allegiance to all Americans. For many decades, we have enriched foreign industry at the expense of American industry, subsidized the armies of other countries while allowing for the very sad depletion of our military.

We have defended other nations’ borders while refusing to defend our own. And spent trillions and trillions of dollars overseas while America’s infrastructure has fallen into disrepair and decay. We’ve made other countries rich while the wealth, strength and confidence of our country has dissipated over the horizon.

One by one, the factories shuttered and left our shores with not even a thought about the millions and millions of American workers that were left behind. The wealth of our middle class has been ripped from their homes and then redistributed all across the world. But that is the pass and now we are looking only to the future.

We assemble here today are issuing a new decree to be heard in every city in every foreign capital and in every hall of power. From this day forward, a new vision will govern our land. From this day forward, it’s going to be only America first, America first. Every decision on trade, on taxes, on immigration, on foreign affairs will be made to benefit American workers and American families. We must protect our borders from the ravages of other countries making our products, stealing our companies and destroying our jobs.

Protection will lead to great prosperity and strength. I will fight for you with every breath in my body. And I will never ever let you down.

We will build new roads and highways and bridges and airports and tunnels and railways all across our wonderful nation. We will get our people off of welfare and back to work, rebuilding our country with American hands and American labor.

We will follow two simple rules, buy American and hire American.We will seek friendship and goodwill with the nations of the world, but we do so with the understanding that it is the right of all nations to put their own interests first. We do not seek to impose our way of life on anyone, but rather to let it shine as an example. We will shine for everyone to follow.

We will reinforce old alliances and form new wurns and reform the world against radical islamic terrorism which we will eradicate from the face of the earth. At the bedrock of our politics will be a total allegiance to the United States of America and through our loyalty to our country, we will rediscover our loyalty to each other.

When you open your heart to patriotism, there is no room for prejudice. The Bible tells us how good and pleasant it is when god’s people live together in unity. We must speak our minds openly, debate our disagreements honestly, but always pursue sold art. When America is united, America is totally unstoppable.

Finally, must think big and dream even bigger. In America, we understand that a nation is only living as long it is striving. We will no longer accept politicians who are all talk and no action, constantly complaining, but never doing anything about it.

The time for empty talk is over. Now arrives the hour of action. Do not allow anyone to tell you that it cannot be done. No challenge can match the heart and fight and spirit of America. We will not fail.

Our country will thrive and prosper again. We stand at the birth of a new millennium, ready to unlock the mysteries of space, to free the earth from the missries of disease and harness the energies, industries and technologies of tomorrow.

A new national pride will stir ourselves, lift our sights and heal our divisions. It’s time to remember that old wisdom our soldiers will never forget, that whether we are black or brown or white, we all bleed the same red blood of patriots.

We all enjoy the same glorious freedoms. And we all salute the same great American flag. And whether a child is born in the urban sprawl of Detroit or the wind-swept plains of nebraska, they look at the same night sky. They fill their heart with the same dreams and they are infused with the breath of life by the same almighty creator.

So to all Americans in every city near and far, small and large, from mountain to mountain, from ocean to ocean, hear these words, you will never be ignored again.

Who will attend the Trump Inauguration Ceremony:

Event planners are estimating that 900,000 people will attend Trump’s swearing-in ceremony and the ensuing parade — about half the turnout of President Barack Obama’s record-holding 2008 inauguration ceremony

Presidents Jimmy Carter, Bill Clinton, George W. Bush, and Barack Obama, along with their respective wives, the First Ladies, have all confirmed their attendance at Trump’s inauguration, including Hillary Clinton, Trump’s main opponent in the election. George H. W. Bush and Barbara Bush will not attend the inauguration due to health reasons.

Donald Trump Inauguration speech time will vary from the original time. It will be telecasted approximately 8 pm on January 20, 2017, in India. Most of the news channels in India will broadcast the event.